Lowell D. Holmes Museum of Anthropology
JavaScript is disabled for your browser. Some features of this site may not work without it. 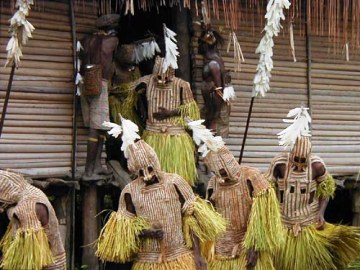 The Lowell D. Holmes Museum of Anthropology began in 1966 as the Museum of Man, at the bequest and initiation of Dr. Lowell Holmes, Professor of Anthropology at Wichita State University in Wichita, Kansas, USA. Over the next 33 years it grew slowly and became known throughout the campus as a small but interesting museum. The collections and exhibitions include cultural items from around the world and archaeological objects predominantly from the American Midwest and Southwest. In 1999, the anthropology department and the museum moved to a new location in Neff Hall. The museum was expanded and Mr. Jerry Martin was hired as Director. This was the first time that the museum had a professional director whose only job was to work with, and develop the museum.

Martin’s concept was to have the museum essentially run and operated by students as part of their museum studies training. He raised funds to hire student staff to run the day-to-day operations of the museum under his supervision. As of the fall semester of 2006, the museum has the funds to hire five student positions. The museum has a wide range of functions. It has exhibitions open to the public, houses a rapidly expanding collection, a support unit for the anthropology department and faculty of Wichita State University, a research facility for students, a repository for United States Government archaeological collections, and the basis for a growing museum studies program. These different functions provide a very wide range of experience for the student staff.

The Holmes Museum sponsors a wide range of research and academic programs. There are a number of students in the museum studies program and several on-going and potential student research projects. For example: a number of students have requested to base their Master’s Degree Projects on the Asmat collection.

During the summer of 2003, students, lead by the museum director Jerry Martin, traveled to the Guatemalan highlands to collect Mayan weavings and fiesta dance masks and study their symbolism and impact on the local indigenous populations. The objects they collect will become part of the museum’s expanding contemporary Mayan ethnographic collection.

During the summer of 2007, the museum director and an anthropology graduate student returned to the Asmat region of New Guinea to produce videos to be used in an Asmat website. This website integrates text, video and audio in order to create a multimedia educational resource for the public. They also gathered footage in the Korowai cultural area.

All items in SOAR are protected by copyright, with all rights reserved, unless otherwise indicated.

Sub-communities within this community