2020 Wichita State University Accreditation 4 Year Review
JavaScript is disabled for your browser. Some features of this site may not work without it. 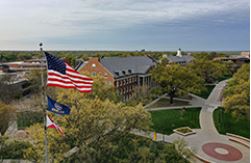 WSU began in 1895 as Fairmount College, a Congregational institution. In 1926, the College became the Municipal University of Wichita, the first municipal university west of the Mississippi River. After 38 years as a municipal university, WSU entered the state system of higher education in 1964 and is now governed by the Kansas Board of Regents.

“The mission of Wichita State University is to be an essential educational, cultural, and economic driver for Kansas and the greater public good.”

WSU’s Vision is “To be one of the nation’s MOST INNOVATIVE PUBLIC RESEARCH universities, known for providing IMPACTFUL STUDENT EXPERIENCES for the people and communities we serve.”

Today, WSU has nearly 4,500 employees, 600 of those serving as full-time faculty, with 86 percent of faculty having earned the highest degree in their field. The more than 70 bachelor’s degree programs, an associate’s degree program, 12 doctoral degrees, 48 master’s degrees, a Specialist in Education degree and 62 credit-bearing certificate programs also draw on the professional expertise of adjuncts and guest lecturers from Wichita-based businesses and organizations of all kinds.

These academic programs are offered by eight degree-granting colleges including the newly named College of Innovation and Design and the Dorothy and Bill Cohen Honors College. Student experience with business and industry leaders on Innovation Campus further leverages both the public and private investment in these facilities.

WSU’s enrollment for fall 2020 was 15,550 students. There were 10,775 undergraduate students and 3,144 graduate students, with the remaining being non-degree bound. WSU is the most racially and ethnically diverse campus in Kansas. Seventy-eight percent are from Kansas, and the remainder are from every state in the U.S., 111 countries and six continents. WSU was named a 2019 Social Mobility Innovator in a ranking of 1,400 U.S. colleges, based on its success in recruiting and retaining low-income students. Approximately 45 percent of all degree-seeking undergraduates at WSU come from families in which neither parent completed a four-year college degree.

WSU is well-positioned to act as a major driver of economic development in the state’s largest urban area. WSU is a highly successful public/private research campus. As part of the 330-acre Main Campus, the Innovation Campus comprises approximately 120-acres that was once a golf course. The Innovation Campus is a unique collaboration of university, public and private partners working together to promote WSU’s research and academic mission and the economic development of the region and state. Private development of office, lab, hotel, restaurant, and retail space comprises over 570,000 square feet of third-party developed space on WSU’s Innovation Campus. Several private companies, ranging from multinationals listed on Forbes’ Global 1000 to start-up firms, call the campus home.